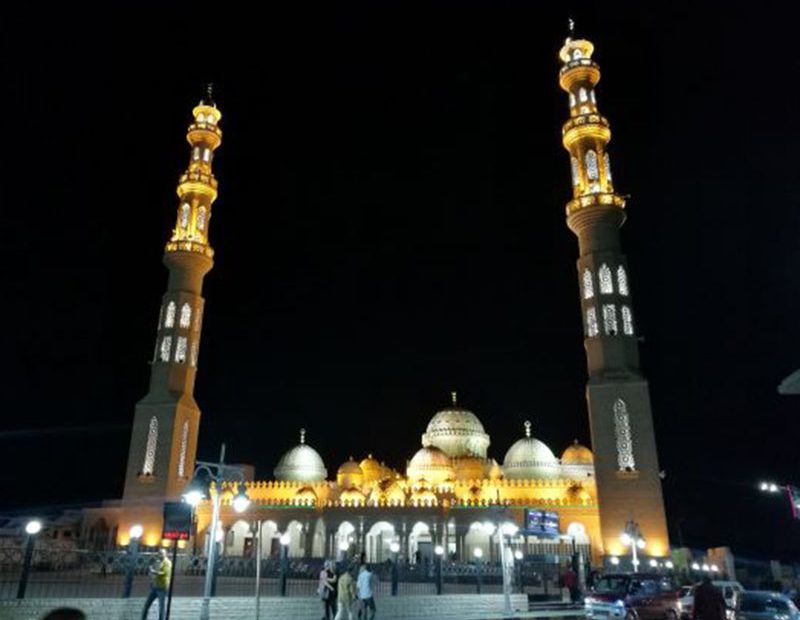 The El Mina-Mosque (A Mina Masjid mecset) is one of the top attractions in Hurghada. Olvassa el itt, what to expect from a visit to El Mina Mosque.

The beautiful mosque is located in the heart of Hurghada, right next to Hurghada Marina (google maps hivatkoznak itt). It is open for visitors daily from 9.00-17.00 (except the praying times). The entrance is free.

Közzététel: This article has affiliate links, which means that if you decide to purchase excursion through the links on my site, Kapok egy kis jutalékot. Neked, ez nem kerül semmilyen extra.

General information about the mosque

El Mina mosque in Arabic: mosque El Mina Masjid has been opened in 2012. The costs of building this massive mosque were around 200 millió egyiptomi font.

It’s one of the most popular places to visit in Hurghada. If you are interested in culture and architecture, El Mina mosque is worth visiting. It’s the biggest and most impressive mosque and a building in Hurghada.

My visit to El Mina Mosque

It’s a little embarrassing to admit, that I visited in El Mina mosque in Hurghada for the first time about a year ago. I had been planning to visit there for years, but I had always something else when I was about to go there.

When my friend came to visit Hurghada, I had to take her to see the mosque. And off course I wanted to see it myself. Neither of us had been in the mosque before. Since it was our first visit to a mosque, we both were excited to see it.

The only bad thing was, that I would have wanted to hear more about the building itself. We were also a little bit confused in the beginning. We had no clue about where to go or what to do inside the mosque.

From this point of view, a guided tour had been a good choice. De másrészről, it was more exciting without.

How to dress in a mosque? Dress code for the mosque

Women need to cover themselves (hair, térd és váll) to get inside the mosque. If you don’t have clothing for covering yourself, you can loan a dress from El Mina Mosque.

We had no idea where we get the dresses from or how things work inside. So first, we walked around outside the mosque and tried to find someone, who can give us proper clothing to wear on. Végül, we found a place from where got the dresses for ourselves.

Általában, you can’t loan clothes from mosques, but there are lots of tourists visiting El Mina Mosque, who don’t necessarily have appropriate clothing. You can also wear your own scarf and clothes as long as you follow the dress code.

Last time when I passed the mosque, I noticed that they have built new bigger booths which are located on the left side of the mosque. This is where you get clothing before going inside.

Is, men have a dress code to the mosque: They are expected to wear long pants.

Both men and women aren’t allowed to use shoes inside the mosque.

The first thing you need to do before entering the mosque, is to take of your shoes.

Since we didn’t have a guide with us, we were clueless about what to do and where to go. Szerencsére, there was a tourist group inside, so we looked at what they did and followed them.

Nekünk, it looked like most of the tourists went to visit the mosque with a guide, amit nyilván nem nálunk. I think we could have got much more out of our visit if we just had a guide with us. My advice to you is that go with a guide, ha lehetséges.

You can book the Hurghada City Tour from itt. A link will take you to GetYourGuide website, which is a popular site for booking the tours.

When you are visiting a religious attraction, the last thing you want to do is act disrespectfully. Összességében, sikerült jól, de a kalauz tette volna a helyzet, így sokkal könnyebb nekünk.

The building is a very big complex, and you have access only to a small part of it. But for sure it’s worth visiting!