Alcoholic beverages and drinking in Egypt 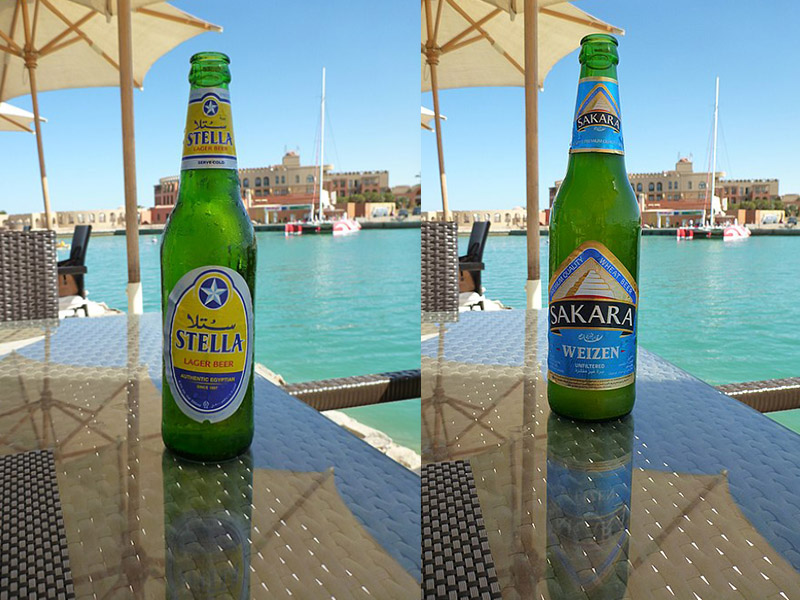 Many people who are planning to visit Egypt are worried about alcohol or moreover the lack of it. If you came to read this article, you are probably one of them.

Don’t worry, I have good news for you, alcohol is served and it is allowed in Egypt. Alcoholic beverages are not illegal in Egypt and it’s widely available. Here is all you need to know about consuming alcohol in Egypt.

Is alcohol available in Egypt?

Despite most of Egyptians are Muslims, alcohol is still available in Egypt. Most of the Egyptians don’t consume alcohol, but some consume in other words it’s not forbidden to drink alcohol in Egypt.

Most of the hotels, restaurants and bars in the tourist areas are serving alcoholic beverages.

In the Red Sea area resorts such as Hurghada, El Gouna and Sahl Hasheesh most of the restaurants are serving alcohol, except the ones whose customers are mainly Egyptians. In other words, if you go to a local restaurant in Hurghada, it’s probable that you are not getting alcohol with your dinner. But, if you go to the restaurants in the main touristic areas, you are most likely to get a beer.

Anyways, even though alcohol is not served in all the restaurants in Egypt, there is no problem for tourists to get drinks. The only restriction is that you are not allowed to drink or buy alcohol if you are under 21 years old. But, to be honest, I have never been asked IDs in Egypt or I haven’t seen IDs asked when drinking or ordering alcohol.

Ramadan doesn’t affect tourists straightforward, but some restaurants and bars may be closed over the holy month. Also, there are fewer people in the clubs.

Can I drink alcohol in Egypt?

Next: Where can I buy alcohol in Egypt?

Where can I buy alcohol in Egypt?

Alcohol is not sold in the supermarkets in Egypt, but it’s actually very easy to buy it. You can buy takeaway bottles from each restaurant and bar that are serving alcohol. Just place an order, and they’ll pack the bottles for you.

Drinkies has many stores in Cairo, but they also have a store in El Gouna from where they deliver to Hurghada. They also have shops in Alexandria, Ain El-Sokhna, El Fayoum, Tanta, Mahalla, Sharm El Sheikh, Luxor and Port Said. Check the locations from here.

Cheers has stores in Cairo, Alexandria and El Gouna. You can see the locations from here.

Both of the stores sell beer, wine, spirits and RTDs (ready to drink). Most of the alcohol sold, both in Drinkies and Cheers are brewed in Egypt. The prices are affordable and ordering is easy. Download the app or call!

Next: Duty-free shops in Egypt

If you want to buy imported alcohol, you have 48-hours time to buy alcohol after you have arrived in Egypt. Imported alcohol is sold at airports and in the duty-free shops. Here are the locations for Duty-Frees in Cairo.

In Hurghada, you find a duty-free shop from Senzo Mall and beside Giftun hotel in El Mamsha, check the location from here. Duty-Free El Gouna is located in the Abu Tigi Marina and Sharm El-Sheik here.

Like said, the alcohol sold in Egypt is often brewed and produced in Egypt. Some of the alcoholic beverages brewed in Egypt can make you very sick afterwards. This is why I usually don’t consume Egyptian spirits such as vodka or whisky, beer and wine are more than enough for me.

I haven’t tried Egyptian whisky myself, but I’ve tried vodka and it wasn’t the best one I’ve tastes. A friend of mine loves Egyptian gin, so not all the alcohol is bad. Depends on who you ask.

Here is a list of the most common and the most popular alcoholic beverages brewed and sold in Egypt.

Egyptians have brew beer since the times of Ancient Egypt. The oldest beer sold in Egypt is Stella. Don’t confuse it with the Belgian beer Stella Artois. Egyptian Stella beer is the most popular beer in Egypt, in the year 2016, it was sold 47.5 million litres in Egypt. It has been on the market since 1897. The company that produces Stella, distributes Heineken and Desperados beers to the Egyptian markets.

Stella is my favourite Egyptian beer (4.5% of alcohol), it’s light and the taste is good. It is sold both in 0.5 litres cans and glass bottles. The price in the restaurants varies from between 20 Egyptian pounds to 60 Egyptian pounds.

The other popular beer sold in Egypt is Sakara. Sakara Gold is 4.0% malt beer, and it is served 500 ml bottles and cans.

The more dangerous version of Sakara beer is Sakara El-King with alcohol content 10% and 15%. You don’t need to drink many of these to get drunk, so be careful!

There is also another beer with a relatively high alcohol content available in Egypt. This beer is called Meister Max and its alcohol content is 8%. It’s sold in a bottle (330ml) and cans (330ml & 500ml).

According to my own experience, Omar Khayam is probably the most common wine in Egypt. You can find it, wherever alcohol is served. For me, it tastes like a wine, but I have a feeling that wine experts won’t rank the taste as high as I do. Omar Khayam is available in Red, White and Rose. It’s produced in Egypt and the price is affordable around 100-200 Egyptian pounds/bottle.

Other Egyptian brewed wine brands are Obelisque, Grand Marque, Ayam and Leila. You can order these wines and imported wines also from Drinkies and Cheers.

Like said earlier, I don’t have the best relationship with strong Egyptian alcohol. Actually, I haven’t even tried the Egyptian vodka after 2010. The quality must be better these days since the Egyptian Vodka called BLUE40 has been winning awards because of its quality. BLUE40 vodka is produced in Egypt under the supervision of Heineken international company. It makes this Vodka is worth trying.

There is also a vodka called BLACK50 available. It is also an award winner and produced under the supervision of Heineken company.

If you want to have an authentic experience with Egyptian vodka, try Volga vodka. This vodka is the reason why I haven’t tasted Egyptian vodka since 2010. Even the smell of this vodka makes you consider twice before trying it. But like said I haven’t tried this for years, so who knows if the quality has improved. Have you tried Volga Vodka lately? What was it like?

Devlin whisky is the first single malt whiskey produced in Egypt. It’s a little pricey compared to other Egyptian Whiskies (i.e. AULD STAG WHISKY) but for sure the quality is better. At least it should.

The gin that is sold in Egypt, it’s not exactly the same that is sold outside of Egypt. But at least it’s cheaper!

There are also rum, liquors, tequila and RTD’s available in Egypt. The only alcoholic beverage missing in Egypt is cider, but luckily there are RTDs to substitute cider.

As a conclusion, alcohol is available and served in Egypt, but the quality of alcohol sold in Egypt is not the best (excluding beer). My advice is: Don’t buy the cheapest bottles (wines & spirits) unless you know what you are buying. If you pay a little extra, you’ll get better quality.

Do you have any thoughts of alcohol in Egypt? What’s your favourite alcoholic beverage sold in Egypt?

1 thought on “Alcoholic beverages and drinking in Egypt”

We use cookies to ensure that we give you the best experience on our website. If you continue to use this site we will assume that you are happy with it. More information read our privacy policy.Ok