Famous Egyptian desserts you should try in Egypt 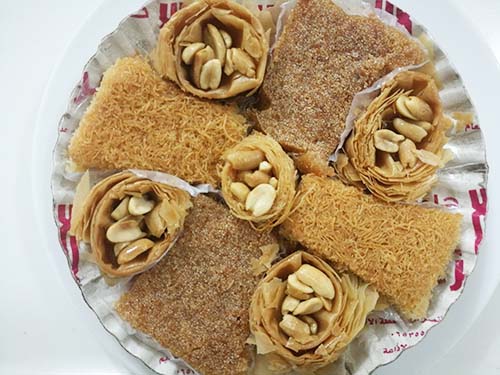 Egyptian desserts are a delicious mixture of international, local, and middle-eastern desserts with an Egyptian twist.

Since most of the famous Egyptian desserts are also known around the world with different variations, you may be already familiar with some of the desserts in Egypt.

In contrast to international and well-known desserts, there are famous desserts that originated in Egypt. Some of them go way back until the pharaonic era.

Like Egyptian food, Egyptian desserts are also heavy, delicious, and full of flavors.

Here is a list of the most famous Egyptian desserts. Which one is your favorite?

Automatic translations are available for the languages below. Click the flag to translate. Choose English to read the original article.

Om Ali which is an Egyptian bread pudding is the national dessert of Egypt. The history of this Egyptian dessert goes back to the 1200-century to the early Mamluk Era when Sultanes were the rulers of Egypt. Om Ali is named after the wife of sultan of Egypt who asked the chefs to prepare a dessert for celebrations.

Read more about the history of Om Ali-dessert.

Om Ali is usually made from the puff pastry layer soaked in milk. The dessert goes to the oven usually with nuts (pistachio), raisins, coconut flakes, and sugar. Usually, it’s flavored with cinnamon.

It’s not the same as a rice porridge but the taste and texture are close to it.

The dessert is baked in the oven in a small pott until it is golden brown. On the top, there are some pistachio nuts and raisins.

Sahlab also called salep or sahlep is a famous sweet drink served in the middle east and parts of Europe. It dates back to the Ottoman era and it’s a very popular drink also in Turkey and many other countries.

It is a kind of hot drink that you eat with a spoon. It is usually made in to cup and the thickness depends on the person preparing the drink. It’s drinkable but can be also very heavy.

Sahlab is made from special flours made from the tubers of orchids. It usually has also raisins, nuts, and cinnamon.

You can buy sahlab powder mixture from the supermarkets in Egypt and bring a part of Egypt to your home.

Sahlab is the best dessert when the weather is chilly and you want to drink something hot and sweet.

Take a look at the recipe for Sahlab from this link.

Next: The best Egyptian dessert

This dessert is a mixture of rice, milk, sugar, and cornstarch with nuts and raisins on the top. It can be enjoyed both cold and warm.

If you have tasted rice pudding you know what this dessert is made of.

Kunafa is the best Egyptian dessert

Kunafa also called Knafeh is definitely my favorite Egyptian dessert. This is a dessert I could eat forever. Kunafa is a famous dessert among the Arabs all over the, and like Basbousa there are different versions of it in different countries.

Kunafa is especially served during Ramadan, but it can be prepared and enjoyed any time of the year.

It’s a kind of baked cheese pastry made from kataifi dough, filled with cheese, dipped in sweet syrup, and topped with crushed pistachio. The filling is usually cheese but it can also be a combination of cream and nuts.

Take a look at this video below if you are interested in how to make Kunafa.

Basbousa also known as semolina cake is a sweet dessert that you may have tasted before somewhere else. It is a famous dessert in Greek, Turkey, and other North-African countries such as Tunisia and Jordan.

The Egyptian version of Basbousa has sweet syrup and it’s topped with almonds and fresh cream. The ingredients that make this cake juicy and mouthwatering are yogurt and the syrup poured on the top

The base ingredients in Basbousa are the same everywhere but the toppings may vary in different countries.

Kahk butter cookies for celebrations that originate from Egypt

Kahk=butter cookies, Kahk are traditional butter cookies that date back to ancient Egypt. Imagine, the recipe for Kahk-cookies has been found in the Great Pyramid of Khufu in Giza.

In Egypt, they are baked during the holidays, especially during the Eid fiesta. That is why the cookies are also called Eid cookies. It is also common to have Kahk-cookies at wedding parties and other fiests.

The cookies are usually round-shaped and topped with powder sugar. They can be plain but they are usually stuffed with different fillings like honey and nuts (agameya) or date paste called (Agva).

Halawa is a confectionery originally from Persia, but it is widely spread to the middle east.

In Egypt, you find it in every supermarket.

Baklawa is also a sweet dessert that is commonly served in the Arab world. It is a pastry made from layered filo pastry filled with chopped nuts that are sweetened with syrup or honey.

This is a pastry you have most likely seen or even tasted before!

Balah El Sham the middle east version of a churro

Do I need to say more? Balah el sham is an old dessert originating from the Ottomans empire. It’s a deep-fried dessert that reminds me a lot of Spanish churros.

Balah El Sham is also one of the desserts that are prepared and served especially during Ramadan.

Take a look at the recipe of Balah El Sham from here.

One thing you are going to pay attention to if you visit the supermarket in Egypt is the selection of different kinds of cakes and pastries.

Every bigger shop has a dish for sweets and desserts such as cakes, muffins, and different kinds of baking.

The best thing is that the cakes in Egypt are basically free. One piece of cake cost about 30 Egyptian pounds which is nothing for a piece of cake.

Back to front page.