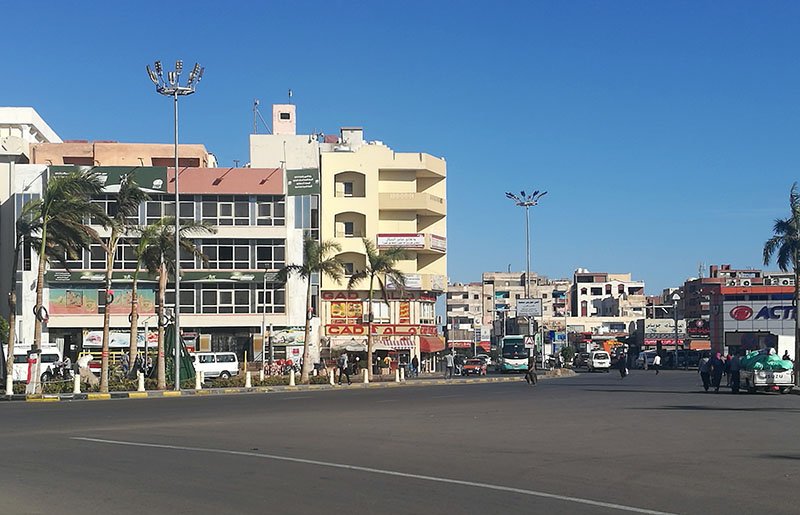 Every time I visit El Dahar, Hurghada, I wonder why I don’t go there more often. There are lots to see and do in El Dahar. Even the atmosphere there is one of a kind, which you can’t experience it anywhere else in Hurghada. It’s the most authentic part of the city.

Dahar is the oldest part of Hurghada and it’s also called Downtown. One could say, that El Dahar is the most Egyptian area in Hurghada. Other areas are built around tourism, so if you want to see and explore real Egypt in Hurghada, go to visit in El Dahar.

In addition to its authentic atmosphere, El Dahar is famous for its Vegetable market (El Dahar market), Souk (Bazaar area) and Coptic Church. All of these are free of charge and therefore should be visited.

All of these things to see and experience in El Dahar are located close to El Dahar Square. El Dahar square in Arabic midan el Dahar is the heart of El Dahar.

When you go to visit in Dahar, ask a taxi, uber or careem to take you to El Dahar Square (Midan El Dahar). And you get there.

Read more: How to use microbuses in Egypt?

Next: Places to visit in El Dahar

Place to visit in El Dahar

The places you should visit in El Dahar are Souk (the bazaar), the Coptic church and vegetable market.

When you stand in the front of the GAD-restaurant, which is next to El Dahar square: Souk (Bazaar) area and a Coptic Church are on your right side. If you keep walking to the right, after you pass the Coptic Church, you will end up to the sea. Not to sea, but the seaside of the Dahar.

A bazaar is almost next to the GAD restaurant on your right. You turn right from the first street and you will end up to the bazaar area. Click here and read more about shopping in El Dahar, at the end of this post.

If you want to go to El Dahar vegetable market, look to your left side and you see the El Dahar market. It’s almost impossible to miss it.

Note! If you are a sensitive person towards animals; be aware of the fact that in El Dahar market (and everywhere around Egypt) you may see caged chickens and other animals dead or alive.

The video from El Dahar square

Last time I visited El Dahar, I took some videos to show you a little bit of Dahar and what it’s made of.

So, here it is, my first video ever: El Dahar square-The heart of El Dahar.

The music in the video is from AMR DIAB, who is one of the most famous singers in Egypt and Middle-East. The song is called Da Law Etsab and it’s from the album Kol Hayaty released in 2018. He released his first album in 1983 and has been released 31 official albums after the first one. 32 official albums. And he hasn’t changed at all in the past 35 years. Google Amr Diab and you see.

I heard a funny story about Amr Diab from the year 2000. It was when he released a new music video from a song called TAMALLY MAAK. He was wearing this shirt in the picture below on the video. Soon after the video was released, every man and boy in Egypt was wearing the same shirt. Every one! It must have looked funny. I even found a picture of the shirt from google with Arm Diab shirt. Here he is.

How to dress in El Dahar? A dress code for El Dahar

Because we are in Hurghada, you won’t be the only tourist or foreigner in El Dahar. Lots of foreign residents of Hurghada lives in Dahar. You don’t need to be scared, the locals have seen the tourists before. Anyways, I still prefer dressing modestly when I visit there.

With this I mean, that I wouldn’t choose a tank top and small shorts myself especially if I know I will be visiting in El Dahar. I usually wear a t-shirt and loose pants or a dress. But anyway, it’s not the end of the world if you end up wearing a tank top and small shorts in Dahar. You probably just feel yourself uncomfortable by standing out from the others. At the end of the day, Hurghada is a touristic city, where the dress code is not that strict.

Read more: What to wear in Egypt? A dress code for Hurghada, Egypt

Actually, I should mention here that you don’t need to cover your hair anywhere in Egypt. I even forget to mention it in my post about the dress code in Egypt, because I thought it was so obvious. There are Christians in Egypt and not all the Muslim women cover themselves either, most do but not all.

Next: When to visit in El Dahar

The area is very crowded in the evenings, so it’s more comfortable to visit Dahar in the daytime. Vegetable market (El Dahar Market) and Coptic Church are places to visit in the daytime, but on the other hand, daytime is not the best time to do shopping in the bazaar area.

Some of the shops there may be closed in the daytime. But maybe you will feel more comfortable to check Dahar first time in the daytime, and then you can visit there later again in the evening. And who knows if your hotel is in Dahar.

El Dahar is not filled with hotels like other parts of Hurghada, but of course, there are some hotels there as well. Most of the hotels in Dahar are a little bit older and cheaper compared to new ones in the other areas.

From El Dahar you find most of the Hurghadas governmental buildings and offices; Police station, Passport office, General hospital, main Post office just to name few. Usually, all the official things are taken care of in El Dahar.

So visit El Dahar and go to explore real Egypt in Hurghada. I highly recommend. And don’t forget to share the post!

Read more: A city of Hurghada | The main areas in Hurghada Egypt