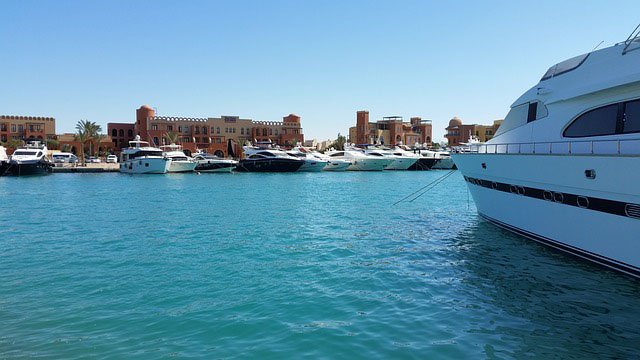 El Gouna is a luxury holiday resort about 25 kilometres away from Hurghada city. If you are spending your holiday in Hurghada, you should definitely go and visit El Gouna. In case you are planning to book a holiday to Egypt, check what El Gouna has to offer.

In this article all about El Gouna.

What is El Gouna? | Information about El Gouna

El Gouna is a project developed by Orascom Development Company. Its chairman Samih Sawiris, is one of the richest men in Egypt. The story of El Gouna begun, when he wanted to find a perfect spot for his house and boat. 30 years later, El Gouna has grown to become one of the most popular luxury tourist resorts in Egypt.

It is a gated peaceful area, where everything is in line. In other words, it is a very clean and safe place. The tourists all over the world come to enjoy its unique atmosphere and beautiful environment.

There is no place like El Gouna, the Venice of Egypt.

El Gouna is considered to be Orascom Developments masterpiece of art. It is a pearl of the Red Sea.

How to get there? Transportation from Hurghada to El Gouna

Last time when I visited El Gouna, I went there by taxi. I used ABC-taxi company, it cost me 126 Egyptian pounds from Sheraton Road to Downtown El Gouna. It took about 45 minutes to get there.

When I came back from El Gouna to Hurghada, I took a car from another private car company and I paid 200 le. It was a late night and I didn’t want to wait for a taxi, so I asked my friend to order a car from the company which she favours. At least I knew that the car would be good and safe. 200 Egyptian pounds is maximum, what you should pay for one way.

Uber and Careem are also operating both in Hurghada and El Gouna. From my experience, both Uber and Careem are a little bit cheaper than private car companies, but the quality of the cars is not that good compared to private car companies. For example, last time when I used Uber, seat belt in the front wasn’t working at all. I’m happy to pay a little bit more about safety because the traffic is crazy in Egypt.

You can also travel to El Gouna by small bus which is operating daily between Hurghada and El Gouna. It leaves from El Dahar downtown (new microbus station) to El Gouna downtown, between every 20 minutes.

Last time, when I went to El Gouna from Hurghada by bus, it cost 5 Egyptian pounds for one way. The price may have changed. Most likely it is more expensive now, probably about 10 Egyptian pounds. It was quite a bumpy trip and took about one hour or more to get there. It was quite an experience, but totally worth it.

If you want to travel comfortably; take a taxi and forget the bus.

Next: Getting around in El Gouna

Getting around in El Gouna

Once you get inside to El Gouna, you probably want to see the different areas and move around in the city. There are two main areas in El Gouna. One is Abu Tigi Marina, which clearly is a Marina, filled with restaurants, yachts and Seaview. And the other is Downtown, from where you can find lots of restaurants, shops and bars.

Moving around inside El Gouna is fun with Tuk Tuk. To be honest, I thought they only exist in Asia, but Egypt always surprises. A ride with Tuk Tuk cost 10 Egyptian Pounds per person (may have changed). Tuk-tuks can be also ordered through Uber application.

If you want a more calm ride, there is also a shuttle bus operating between different areas. More details from https://elgouna.com/transportation/.

Places to visit in El Gouna

Whenever I take a new guest to visit in El Gouna, the first place we go to is El Gouna Golf club (google maps link here). Next to the Golf Club, there is a tower, from where you get to see El Gouna from above.

The entrance to the tower is free of charge, and there is a restaurant downstairs in case you get hungry or thirsty. Climbing up by stairs is a small exercise, but totally worth suffering.

Usually, I stop at the tower on my way to El Gouna. If you go there by taxi, ask the taxi to wait for a while. Climb up to the tower, take some pictures, enjoy the view and continue with the same taxi to Marina, Downtown or where ever you are about to go.

After sightseeing, it’s time to relax. Abu Tigi Marina (Google map link here) is a perfect place to enjoy the sun and relax.

Take a cocktail or two, and enjoy the international atmosphere of El Gouna. From Abu Tigi Marina, you find multiple high-quality restaurants, coffee shops and bars with terraces. Go and visit the Art gallery, take a walk around the Marina, buy souvenirs, admire the biggest yachts you have ever seen (unless you are from Monaco or Nice).

If you yearn after the sun and your daily dose of vitamin-D is not filled yet, go to the Moods restaurant and beach club. MOODS has a beach acces. It is located here.

More about the beaches in El Gouna here.

Be prepared that prices at the restaurants in El Gouna are higher, compared to Hurghada.

After exploring Abu Tigi Marina, it’s time to move to Downtown El Gouna. Downtown with its surroundings (Tamr Henna) is worth visiting. The Nubian architecture in the city is beautiful, and all the areas are nice and clean. It is child-friendly (no cars driving fast) and it’s easy to move around there, like in most of the parts in El Gouna.

Compared with Hurghada, El Gouna is cleaner, calmer and child-friendlier, especially from the safety point of view.

It’s a good holiday destination for those, who want to spend “a slow holiday.” I mean, if you want to go to the beach, enjoy the sun and eat well. Then El Gouna is a perfect destination for you. I consider El Gouna to be a little bit boring for myself, but for a relaxing holiday, it’s excellent.

El Gouna is perfect especially for the ones, who are visiting Egypt for the first time or haven’t been travelling much. El Gouna is clean, quiet, safe and beautiful.

Incase you need more action, you can always visit Hurghada from El Gouna.

Next: Restaurants and Shopping in El Gouna

There are over 100 restaurants in El Gouna. If you love eating, like I do, you should definitely try the restaurants.

There are some really good restaurants in El Gouna, for example, Chuchichäschtli-Swiss restaurant offers delicious food. The restaurants that I have tried have all been good, but they are more expensive compared to Hurghada.

The other good restaurants in El Gouna Downtown which I can recommend are: Puddleduck Bar & Restaurant, Athena Greek Taverna and White Elephant Thai restaurant.

Remember that Egypt is very cheap at the moment, which makes El Gouna relatively cheap as well. But if you are on a budget holiday, Hurghada is a better choice for you than El Gouna.

Shopping is also more expensive in El Gouna and honestly, there is not much to shop. There is a small bazaar (souk) in Downtown, some boutiques, an electronics store, and few grocery stores, but it’s definitely not a shoppers paradise. If you want to shop a lot, maybe El Gouna is not for you. But of course, you can always visit Hurghada from El Gouna.

It doesn’t matter, If you are a shopper or not, I recommend you to visit El Gouna at least for one day. I’m sure you love it there!

Read more: The best places to shop in Hurghada

Enjoy and have a lovely day in El Gouna!

Move back to all post page to read more about Hurghada, Egypt.