How to deal with the taxis in Hurghada and all Egypt 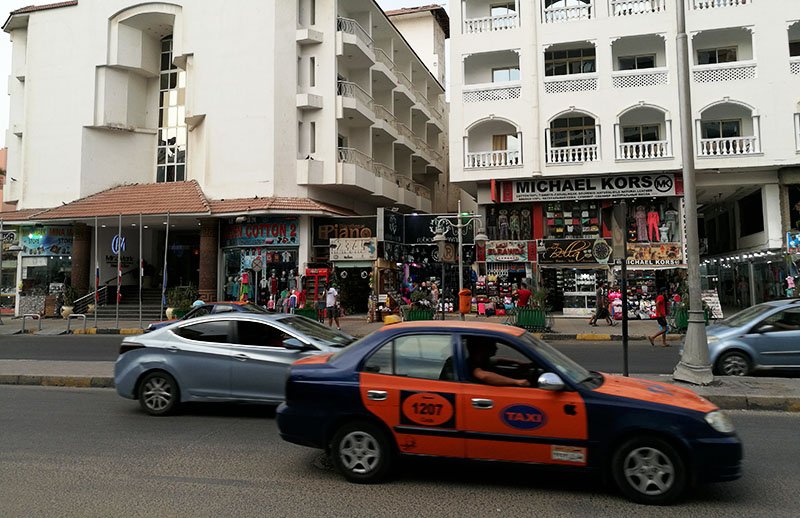 Taxis are very cheap to use in Hurghada and in all Egypt, but there are way too many of them. This means that there are taxis everywhere, but not enough customers for everyone. This is why dealing with taxis in Egypt is difficult. Read here how to use the taxis in Hurghada and all Egypt.

Taxis are very affordable to move around in the cities of Egypt. Most of the people can’t afford to buy a car of their own, or moreover, they don’t even need one since driving a taxi is ridiculously cheap in Egypt and Hurghada.

Taxis are everywhere and they want to take you for a ride, even when you are sleeping. Seriously, you can’t hide from the taxis. You see and hear them everywhere you go.

In Hurghada taxis are orange-blue coloured and Cairo the taxis are white.

Five kilometres by taxi costs about 20-30 Egyptian pounds (LE.). The distance between Sakkala and Mamsha is about five kilometres, likewise from El Dahar to Sakkala.

The distance between Mamsha and El Dahar is about 10 kilometres, and it will probably cost about 40 le.

Read more about the different areas in Hurghada:

The City of Hurghada

If you have visited Hurghada before, you should know, that in the last few years taxi prices have doubled. So don’t expect to travel for 10 Egyptian pounds anymore. Anyways, taxi fares are still very reasonable.

If you don’t have any idea about how much you should pay for the taxi in Hurghada, you can always ask someone. I’m sure your hotel staff knows how much taxi is for example to Marina from your hotel.

So, regular taxis in Hurghada are coloured orange-blue in the Red Sea area. In Cairo they are white.

To be honest, it’s very common to disagree about the price with the taxi drivers. From my point of view, the problem is that there are way too many taxis in town and lots of drivers. When there is no work enough and you need to feed your family, some of the drivers overcharge the customers to get more income.

Next: Tips for using the taxis in Egypt

Here are the tips for how to deal with taxis in Egypt to avoid the problems.

Before I share my tips, I want to remind you that there are also good and honest taxi drivers working in Hurghada and all of Egypt. But it’s good to be prepared for the worst, at least you won’t be disappointed.

Follow these instructions when using the taxis in Egypt. When you know how to deal with the taxis, it will be much easier for you.

Things to notice before going inside to the car

If you are a woman travelling alone, don’t go to sit to the front seat next to the driver. Always, use a back seat.

Things to notice when you are inside the taxi

You can also ask a driver to turn the taximeter on. Some drivers refuse to use taximeter, usually, they are usually they say it is “broken.” The problem with a taximeter is also that you never know if the meter has been fixed or not. There are lots of different tricks taxis use to get extra money. So be prepared.

Anyways, don’t be afraid to use taxis. Not all the drivers are bad. If you find a good driver, use him. For example, some drivers are willing to wait for you when you go shopping. They can even take you to different places during the day. You can use the same taxi for hours and at the end, you pay for example 120 Egyptian pounds per hour, or whatever you have agreed on with a driver. Pay a fair price for a good driver and everyone wins.

Next: The other ways for getting around in Egypt

Other ways for getting around in Egypt

When I move around in Hurghada, I prefer using UBER, CAREEM OR ABC-TAXI. UBER and CAREEM are both working also in Cairo. The cars are better than regular gabs and you don’t have to negotiate about the prices. To use these services you need an Egyptian sim-card.

If you are not familiar with using UBER, CAREEM or ABC-Taxi. Check these posts to read more information: Uber and Careem in Hurghada And Abc-taxi Hurghada

If you decide to move around in the city, you can also use a microbus. Microbus is, even more, cheaper than the taxi (about 2.5.le/person) and very simple to use (just hop in and off).

Some hotels in Hurghada have their own shuttle buses. Ask more details from your hotel staff.

All in all, don’t be afraid to move from your hotel, explore Egypt, there is lots to see!

WHAT KIND OF EXPERIENCES YOU HAVE ABOUT THE TAXIS IN EGYPT? DO YOU PREFER REGULAR TAXIS OR UBER?